Disc 1 - Side A
Theatrical Version & Bonuses 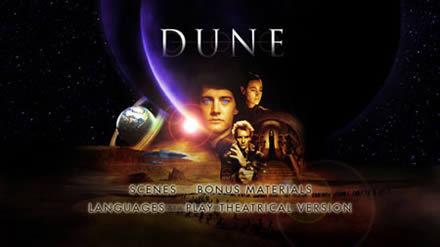 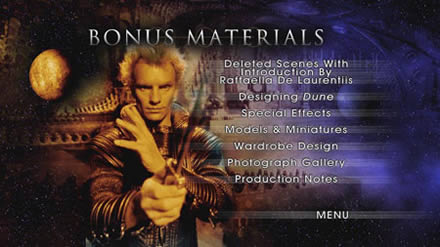 DELETED SCENES WITH AN INTRODUCTION BY RAFFELLA DE LAURENTIIS
Producer Raffaella De Laurentiis explains to the viewer that no final cut ever existed outside of the theatrical release. Along with deleted material from the film.

Fremen Monk tells Paul that he will have to past tests.
Running Time: 0:40
See scene 180A of the Seventh Draft of Dune.

Segement of the Original Water of Life sequence, played in the background as Raffaella talks about changes to the film.
See scene 248 of the Sixth Draft of Dune.

Original scripted introduction to the film, by Reverend Mother Ramallo. Someone (David Lynch ?) off-screen reads the lines "Bi-la kaifa", which according to the script, was the response of twenty thousand voices.
Running Time: 1:32
See scene 1 of the Sixth Draft of Dune.

Leto and Thufir discuss what the Fremen called Paul.
Running Time: 1:24
See scene 112 of the Sixth Draft of Dune.

Shadout Mapes test Jessica. The first part of this scene appears in the Extended Version, but is cut short, this segment completes the whole scene.
Running Time: 1:29
See scene 92 of the Sixth Draft and Seventh Draft of Dune.

Extended scene after Paul and Jessica crash landing in the desert. As scripted it would have been intercut with visions of Caladan.
Running Time: 0:42
See scenes 140 and 142B of the Sixth Draft of Dune.

Paul kills Jamis, and gives Water to the Dead.
Most of this sequence appears in the Extended Edition, this segment completes the scene.
Running Time: 1:11
See scene 168 of the Sixth Draft of Dune.

Watch Paul kills Jamis, and gives Water to the Dead on YouTube

Paul dreams of his terrible purpose in Harah's room at Sietch Tabr. As scripted this scene would have been intercut with visions of Caladan, the desert and the blood ocean.
Running Time: 0:32
See scenes 183 and 185 of the Sixth Draft of Dune.

Death of Thufir Hawat. This scene appears to have been completed, and includes music. It also appears on the old Fleer trading cards, and so was likely cut from the film at the last minute.
Running time: 2:31
See scene 281 of the Seventh Draft of Dune.

Paul takes Irulan as his wife, but in name only. This scene appears to have been completed, and includes music. It also appears on the old Fleer trading cards, and so was likely cut from the film at the last minute.
Running time: 1:18
See scene 283 of the Seventh Draft of Dune.

Watch Paul takes Irulan as his wife on YouTube

DESIGNING DUNE
Insight into Dune's visual design as it was developed by director David Lynch and production designer Anthony Masters, including original sketches and paintings.

DUNE FX
From explosive pyrotechnics to the mechanics of the fighting robot this is a look at the process of visual effects artists.

Interesting footage of rehearsing a battle in the desert and the various use of wire work in Dune.

DUNE WARDROBE
Bob Ringwood and others explain how nearly 4,000 costumes were designed for Dune.

There are also a few very short glimpses of other cut scenes, including Paul and Chani's love scene, a crowd of Fremen wearing hats, and Jessica in labour. We also learn that Sting should have been naked!

PRODUCTION NOTES
11 Screens of notes about the filming of Dune.

CAST & FILMAKERS
Err, according to the insert with the DVD there is meant to be some notes on the cast and filmakers, but I can't find it!

Disc 1 - Side B - Extended Edition 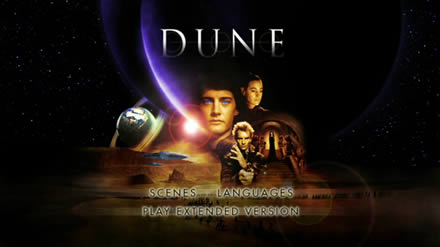 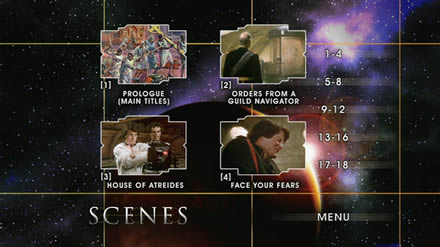 There has been a lot of confusion and mis-information about the aspect ratio of the Extended Edition on this DVD. Let me state here, for the record, that the entire 177 mins of the film is presented in Anamorphic 2.35:1 Widescreen, and yes, that includes the prologue.

Also, it is important to note that as the prologue was originally created for TV broadcasts of Dune it was created at 4:3, and so to present it in 2.35:1 Universal have heavily cropped the top and bottom of the image.

Here I have overlaid (and squashed to fit) the US DVD over the prologue from the French DVD. The American image is sharper, and a bit more image to the left, but has been heavily cropped top/bottom. The Prologue is in 2.35:1 ratio too, not 4:3, or even 1.85:1 but Anamorphic 2.35:1. 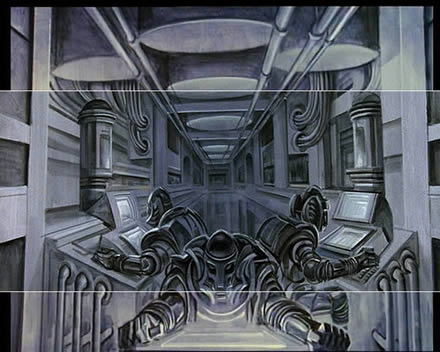 For a great breakdown of the differences in the Extended Edition checkout Building the Perfect Dune by Sean Murphy. Originally published in Video Watchdog Magazines 33 and 34 it is an excellent comparison between the two edits. Please note that when the article was originally published the Extended Edition was not available in Widescreen format, and so some of the information (Widescreen Film Version Vs. Panned and Scanned Television Version) is not applicable to this DVD.

This is a great Dune DVD package, Region 1 finally has a good Anamorphic copy of the Theatrical version on DVD. Also, for the first time officially, Region 1 gets the TV edition released on DVD - and it is in 2.35:1 Widescreen - a world first.

The extras are good, with deleted scenes being shown for the very first time too. The only drawback is that Universal have tried to fit everything onto a single (double-sided) DVD. This seems to have created a space issue, and the DTS soundtrack that was originally announced has been dropped, and there must have been many more deleted scenes that could have been included given the space. What Dune deserved was a 3 DVD set, with an entire disc of extras. Perhaps when Universal release Dune on HD-DVD more scenes will appears, Dune fans will just have to wait and see.

Other reviews of Dune: Extended Edition