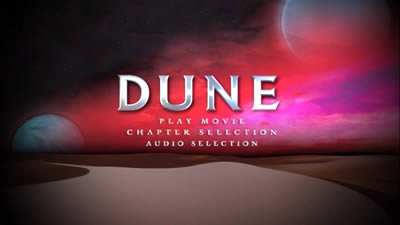 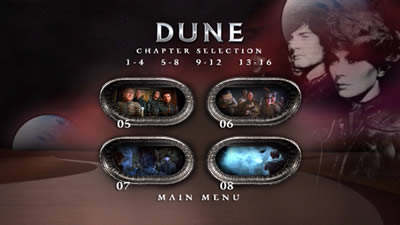 Note: The chapters are not named, I have taken the titles from the UK Dune Special Edition DVD 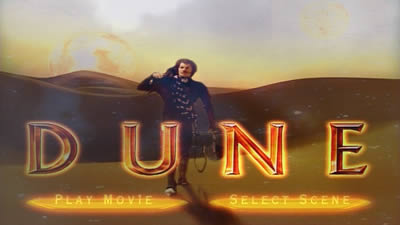 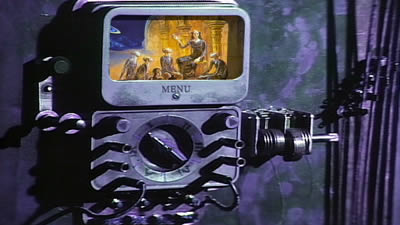 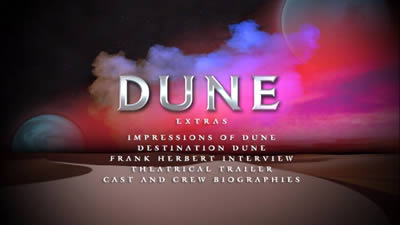 [Note: The extras are mostly the same as those on the UK Dune Special Edition DVD]

This is the main extra on the DVD and is a excellently produced series of interviews with cast and crew, intermixed with footage from the movie, and behind the scenes images. Mike Goodridge (author of Directing [Screencraft Series]) arranged and conducted most of the interviews, which took place in LA, New York and London.

Conspicuous by his absence is David Lynch, who rarely talks about his films, and given that, ultimately, Dune was an experience he'd soon as forget it is no great surprise that he isn't part of the interview. But even without the director we still hear from many of the other people who shaped Dune into the movie that it was.

The documentary, known as 'Destination Dune' was used for publicity and to show at conventions, and so is designed to be short, running at just under 6 and a half minutes. But in this short time we get to see several scenes being rehearsed and filmed (including a couple of cut scenes) plus get a peak inside the model shop with David Lynch discussing designs with Carlo Rambaldi. Dino De Laurentiis, and of course, Frank Herbert also make an appearance.

The film was transferred from 3/4" tape, and has been digitally enhanced, but obviously the quality isn't comparable to that of the movie.

If Dune was filmed today it would no doubt have a team of people recording everyone and everything just for the DVD release, as it is we are lucky that we get this glimpse into the production process of Dune. A must see look at the making of the movie Dune.
Running time: 6.16

At under 2 minutes this isn't the longest extra, but it is interesting as it features Frank Herbert (minus beard) on UK breakfast TV talking about Dune. This interview, along with Frank Herbert's brief appearance in the 'Destination Dune' documentary also on this DVD is one of the few times I've seen any video footage of Frank Herbert, and is a welcome addition to the DVD.
Running time: 1.24

Theatrical Trailer
Ah, the obligatory trailer. Nothing special about it, and it has been on just about every Dune DVD. But good to have for the sake of completeness. Notice the style of the 'Dune' logo, which was changed when the film was released.
Running time: 3.03

Note: The first batch of DVDs contained an error on the DTS track (the centre channel comes through the right speaker), anyone who has a faulty disc can return it for an exchange free of mailing charges: